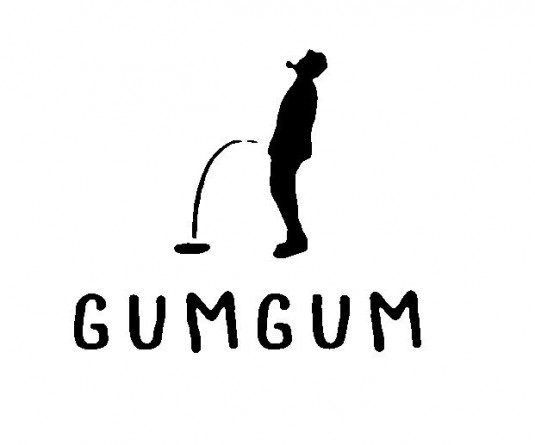 The applicant filed a trademark application for GUMGUM and device designated to use on services of cafeterias, bars and restaurants. The trademark device depicts a man having a cigarette pipe dangling from his mouth, his hands in pockets while peeing casually (hereinafter the “GUMGUM man”). Because of the GUMGUM man’s casual peeing gesture, the Taiwan Intellectual Property Office (TIPO) issued a preliminary rejection on the ground of Article 30-I-7 of the Trademark Act, which stipulates that a trademark shall not be registered if it is contrary to public policy or to accepted principles of morality.

The examiners indicated that the GUMGUM man may give consumers an impression of a middleaged man peeing in public, or at least highly likely to associate the GUMGUM man to an uncivilized behavior. The examiner further elaborated the law: Article 30-I-7 of the Trademark Act is meant to maintain the public order and good morality. With regard to the public order, it refers to the general interest of the nation and the society, whereas a good morality illustrates a general moral concept accepted by the society.

The provision may be applied to a trademark if it, either in form or in its meaning, is contrary to the nation’s interest or socially accepted moral concept. But the application of law shall still put into consideration the social atmosphere at the time when the trademark is trying to register, and the law does not limit to regulate a trademark itself. In case a trademark itself does not contain any bias, vulgar, discriminating, or unpleasant wordings or devices, but the use of the trademark may lead to the same phenomenon as soon as the trademark is associated with the designated goods or services, the trademark will still be governed by the aforesaid provision.

The examiner in its preliminary rejection gave six types that are generally identified as situations against public order or a good morality. They are: (1) damaging the national dignity, (2) instigating a crime or disturbing the social order, (3) a mark of an illegal or armed rebellion organization, (4) causing a terrifying or repulsive feeling that may disturb mental health, (5) disrespectful to a country, an ethnic group, a religion, a profession or an individual, and (6) contrary to moral principles, promoting superstition and etc.

In rebuttal, our trademark attorney emphasized that the application of Article 30-1-7 shall be determined by the integrated factors of social atmosphere at the time of the registration, the marketplace of the designated goods and services, and the recognition of the relevant public. The trademark device at issue -- the GUMGUM man – was a coined drawing with American style illustration, the design of which is humorous and entertaining. The applicant company was established by a group of young backpackers who love traveling, food and drinks. Deriving from the enjoyable experiences during their trips, it is the founders’ common idea to build a relaxing space for people to interact and to share. The device of the GUMGUM man symbolizes a free spirit without care or worries, as shown by a cigarette pipe dangling from the man’s mouth while peeing. It was hoped that consumers may find his most relaxing moment at the applicant’s restaurant. The applicant tried to convey the idea by his unconventional humor and believed such a funny trademark device would interest and impress the consumers.

The applicant also submitted the record of significant gross revenue and various media reports and great food reviews to demonstrate its successful operation under the trademark GUMGUM and the device. In addition to no negative comments regarding the GUMGUM man device, most reviewers on the internet said the device is naughty, funny and humorous. All the evidential materials prove that the spirit of the brand coined by the applicant has been well-accepted by consumers.

At the end TIPO, allowed the registration of GUMGUM and the device on the restaurant-related services. It brings a happy and relaxing ending to the GUMGUM man saga.